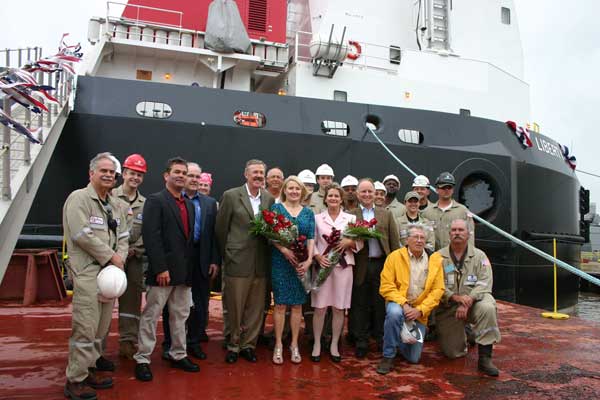 Crowley closes out its Decade-Long, $1 Billion, U.S.-flag ATB New-Build Program with the Christening of the Liberty/750-3

Eleven years after the launch of its first Articulated Tug-Barge (ATB), Crowley Maritime Corporation christened its 17th ATB, the Liberty/750-3, yesterday at the VT Halter Marine Shipyard in Pascagoula, Miss. The tugboat and 330,000-barrel petroleum tank barge are the final vessels to be built in a more than $1 Billion, decade-long ATB construction program undertaken by Crowley to expand the company’s U.S.-flag petroleum services fleet.

“We set out to offer customers the safest, most reliable petroleum transportation services many years ago by pairing our operational expertise with these safe and innovative vessels,” said Tom Crowley, company chairman and CEO. “It fills us with great pride and satisfaction to see our vision come to fruition, and to deliver for our customers.”

More than 70 guests, including vessel crewmembers, representatives from VT Halter Marine and Marathon Petroleum joined Crowley in celebrating this milestone, which included the time-honored tradition of breaking a champagne bottle over the hull of each vessel. Crowley’s Vice President of Procurement Wendy MacDonald had the honor of christening the tug, Liberty, while Marathon Representative Kathleen Peiffer christened the barge, 750-3.

The Liberty/750-3 is the third in its class to be built for Crowley. The first, the Legacy/750-1, was christened in November 2011 and the second, the Legend/750-2, was christened in Tampa last year. Both vessels are currently at work along the U.S. Gulf Coast. The 750-Class barges have a capacity of approximately 330,000 barrels and are 45,000 deadweight tons and 600 feet in length. All three barges were built by VT Halter Marine in Pascagoula. The 16,000 horsepower tugs, Legend, Legacy, and Liberty, were constructed by Dakota Creek Industries, Inc. in Anacortes, Wash.

More: Crowley Adding More than 3,000 Pieces of Equipment to Fleet

Posted by maritimenews on May 29, 2013. Filed under All news, Business, Company News, Latest news, Shipping News, Videos, World. You can follow any responses to this entry through the RSS 2.0. Both comments and pings are currently closed.
The Maritime News © 2011
About Us | Report Your News | Advertising | Contact | Privacy | Terms