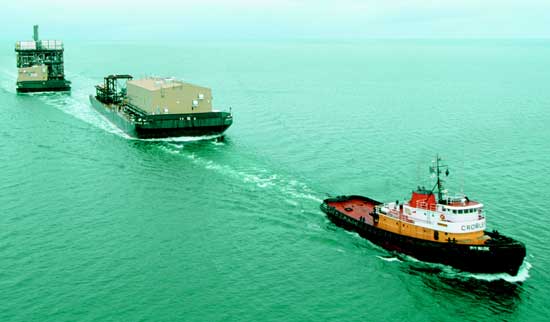 Crowley Maritime Corp.’s liner and logistics group was recently presented with its eleventh-consecutive Logistics Excellence Award for export quality – an honor given in recognition of Crowley’s ongoing efforts to safely and efficiently transport Toyota vehicles to Puerto Rico from the U.S. East Coast.

“We are extremely pleased to be recognized by TLS for this prestigious award,” said Kelley. “Crowley employees have done an outstanding job in delivering Toyota vehicles in a manner that exceeds TLS’ expectations for quality and safekeeping.”

As Toyota’s exclusive carrier, Crowley transported over 13,000 of the company’s vehicles to Puerto Rico in 2012.

Crowley is highly successful transporting new and used vehicles because it invests the time and resources to do the job right. Crowley’s Puerto Rico vessels are designed with specialized automobile decking, which allows up to 240 vehicles per voyage to be driven on, stowed and transported in a protected space. A team of auto checkers and traffic specialists play a large role in ensuring that load lists are correct and documentation is complete prior to sailing. Additionally, the company has dedicated fenced, lighted and secured terminal space in Jacksonville for approximately 400 Toyota vehicles near the vessel loading ramp, minimizing the need for Toyota vehicles to be driven around and through the terminal.

“It all adds up to white glove service,” said Noyer. “And our customers – Toyota in particular – appreciate that. We are proud to be a part of this outstanding partnership.”

For more than 50 years Crowley has served the Caribbean Basin, providing diverse shipping and logistics services between the U.S. and more than 24 points throughout the region, including Puerto Rico.

Posted by maritimenews on April 18, 2013. Filed under All news, Business, Company News, Latest news, Travel & Tourism, UK. You can follow any responses to this entry through the RSS 2.0. Both comments and pings are currently closed.
The Maritime News © 2011
About Us | Report Your News | Advertising | Contact | Privacy | Terms