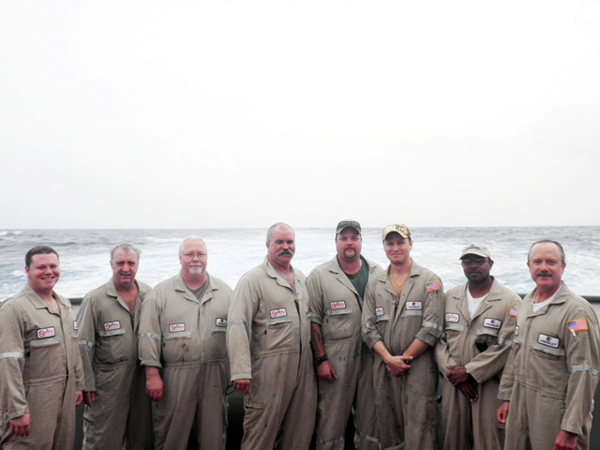 The crew aboard Crowley Maritime Corporation’s articulated tug-barge (ATB) Achievement/650-8 recently performed a heroic rescue of an injured man who was struggling to stay afloat near the base of the Sunshine Skyway Bridge in Tampa Bay, Fla.

The on-watch crew noticed a man bobbing in the water on the port side of the vessel around the same time that emergency radio calls from the St. Petersburg Coast Guard were issued. Crowley’s Allen Williams, AB, responded by immediately throwing the stranded man a life ring and Captain Gus Cramer sounded the man overboard alarm. Putting their emergency and safety training to use, the Crowley crew readied the fast rescue boat for deployment while Captain Cramer slowed the ATB’s speed to ensure a safe boat launch.

Once in the water, the fast rescue boat, manned by Crowley’s Travis Stringer, AB/tankerman, and John Crawford, second mate, motored towards the man, who by then had drifted nearly a mile and was calling for help. Despite the windy conditions and rough chop, the Crowley team managed to pull the badly injured man from the water in less than eight minutes from the initial sighting and wrapped him in a blanket until the St. Petersburg Fire and Rescue boat arrived on scene to perform other life-saving treatments.

Throughout the emergency procedures, Captain Cramer worked closely with Tampa Bay Harbor Pilot Mike Buffington, who helped the Crowley crew perform the slow-down procedure, remained in communication with the Coast Guard and ensured that the ATB remained out of danger by avoiding oncoming vessel traffic and keeping it well within the commercial shipping lanes.

“This crew did a phenomenal job working as a team to save this man’s life,” said Cramer. “From the guys on the bow, to the men on the response boat, to everyone who kept the vessel safe during the rescue … it was just a fantastic, total team effort. We did our jobs safely and saved a life in the process.”

“It is obvious from this event that the crew was well trained and highly proficient in the execution of their duties,” said Buffington. “Each crewmember … gave full devotion to the task at hand. I am convinced that with the prevailing weather and sea conditions that this individual would not have been recovered from the waters has it not been for the valiant efforts of the captain and crew.”

The crew aboard the Achievement/650-8, which is a member of Crowley’s petroleum services fleet, is fully trained and prepared to respond to a variety of incidents. In addition to meeting defined regulatory training requirements, the company’s crewmembers participate annually in company-sponsored safety programs, designed exclusively for mariners. The program provides training in survival tactics, shipboard fire fighting, medical incidents and other relevant topics give the mariners the skills they need to survive in emergency situations.

“On behalf of everyone at Crowley, I want to congratulate this brave crew for putting their training to good use to perform the vital measures needed to save this man’s life,” said Crowley’s Rob Grune, senior vice president and general manager, petroleum services. “These crewmembers are true heroes and deserve to be recognized for their actions.”

By the end of this year, Crowley will own and operate 17 U.S.-flagged ATBs, which include 155,000-barrel, 178,000-barrel and 327,000-barrel capacity tank vessels at 96 percent. Each vessel is chartered to leading companies in the petroleum and chemical industries. Additionally, Crowley owns and operates a number of Jones Act tankers which trade both domestically and internationally.

Posted by maritimenews on January 16, 2013. Filed under Accidents, All news, Latest news, World. You can follow any responses to this entry through the RSS 2.0. Both comments and pings are currently closed.
The Maritime News © 2011
About Us | Report Your News | Advertising | Contact | Privacy | Terms