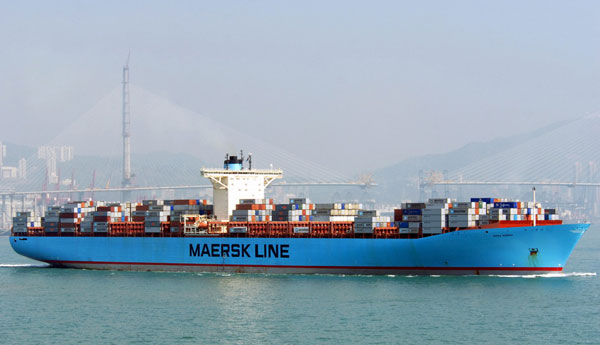 Emma Maersk, Maersk Line’s largest container vessel, experienced ingress of water into the engine room. The vessel had just commenced its southbound transit through the Suez Canal en route to Asia. The captain decided to terminate the planned voyage and go alongside the nearby Suez Canal Container Terminal (SCCT).

According to Captain Marius Gardastovu, there was never any real danger or panic at any point. “Of course it is a shocking experience when you look back and consider what could have happened,” he says. “But given the circumstances, everything was handled as well as possible because of a close-knit crew who knew exactly what to do.”

She was loaded with containers equivalent to 13,537 TEU of which 6,425 were full. The first step was to identify the cargo onboard. Cargo lists were shared with local Maersk Line customer service agents who have since reached out to all its customers with cargo onboard with the relevant information.

Alternative arrangements for the cargo have been made whereby sensitive cargo was loaded onto Maersk Line’s existing network shortly after the incident. Further contingencies and schedules have been finalised as part of the cargo was loaded on Maersk Kotka (16B/1301) on 11 Feb, some of the cargo were loaded on CC Medea (3FO/933E) on 12 Feb, and the remaining eastbound cargo will be loaded onto Maersk Kokura (98A/1305) on 18 Feb.

The developments are being monitored continuously to ensure minimal impact to customers. Maersk Line’s operations teams are working in close coordination with the local customer and sales representatives to keep customers updated on the developments.

As far as the vessel is concerned, the leaks have been sealed, and Emma Maersk will soon leave SCCT to be towed to a European port for repairs. This may take months, but Maersk Line is able to reorganise its fleet without chartering replacement tonnage. The 9,660 TEU 48Y-Butterfly will replace Emma Maersk on the AE10 Asia-Europe service until she is ready to re-enter service.

Posted by maritimenews on February 18, 2013. Filed under Accidents, All news, Business, Latest news, Shipping News, World. You can follow any responses to this entry through the RSS 2.0. Both comments and pings are currently closed.
The Maritime News © 2011
About Us | Report Your News | Advertising | Contact | Privacy | Terms