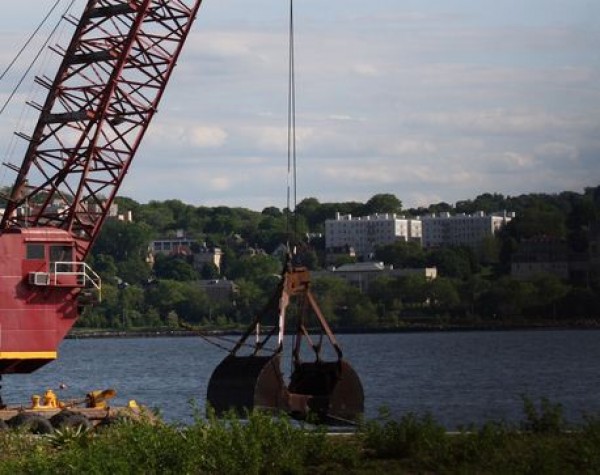 Staten Island’s shipping ports have moved one step closer in being able to accept the next generation of super container ships with the completion of dredging work in the Kill van Kull.

Although the U.S. Army Corps of Engineers is completed with its dredging in the Kill van Kull, “private port users along the waterfront still may need to dredge their berths,” Elias said.

“Private entities” could hire the same contractors that the U.S. Army Corps used in its dredging work, and the Army Corps would only be involved in issuing the permits to do so, Elias said.

A Boston-based company is currently placing sand over power transmission cables in the Kill van Kull that connect a Bayonne power plant to Brooklyn, and that work in the channel is expected to conclude in about two weeks, Elias added.

The eastern two thirds of the 38 miles of underwater shipping channels around New York Harbor have been dredged to the 50-foot depth necessary in allowing huge super container ships to access ports in New York and New Jersey, according to information from the U.S. Army Corps of Engineers.

The Arthur Kill channel approaching the New York Container Terminal has yet to be finished, but that dredging work is scheduled to be completed by 2013, according to the Army Engineers.

The project is “long overdue.” But upon its completion, it will allow the NYCT to better compete internationally for business, said NYCT president and CEO Jim Devine.

This “critical infrastructure” project is an “improvement of the long-term viability of the NYCT,” Devine added.
The dredging work coincides with massive improvements to the Panama Canal. When work is completed to that Central American waterway in 2014, it will be able to handle a flood of new super container ships that will use the man-made strait to reach ports here, Devine said.

These new container ships are not too much longer — about 1,100 feet as compared to the current ship length of 950 feet — but they are wider and taller, which is the reason for all these projects, Devine said.

The new ships will be able to accommodate 18 to 20 containers across, compared to the 13 containers that can be lined across older ships, and they can be stacked nine containers high instead of six, as with today’s ships, Devine explained.
The additional weight displaces more water, making the ships deeper. Therefore, the increase in width, height and depth are the major concerns that must be addressed for area ports to be able to compete for international business in the future.
“It’s those other dimensions that really defines these Panamax ships,” Devine said.
The Kill van Kull channel connects to the Arthur Kill Channel, Newark Bay and Upper New York Bay in the harbor’s network of shipping lanes.

“The deepening of the Kill van Kull is a great achievement that enables navigation to several of the ports in the New York and New Jersey area for the largest ships in the world, and the project’s completion is a critical milestone in the development of a world-class harbor estuary,” Col. John R. Boule, the Army Corps’ New York District Commander, said.
Dredging alone will not completely transform New York Harbor into a “world-class harbor estuary,” not without raising the height of Bayonne Bridge and building a new Goethals Bridge.

Officials at the Port Authority of New York and New Jersey are currently in the “planning and engineering phase” of the project, but there is no set start date, confirmed a PA spokesperson.

The roadbed of the Bayonne sits 151 feet above the Kill van Kull, and the planned raising of the expanse will bring that height up to 215 feet, allowing the new generation of container ships to pass under the bridge.

The bridge approaches will be made slightly steeper and longer to accommodate the additional 64 feet that the larger ships will require.
The 83-year-old Goethals Bridge, which spans the Arthur Kill, will be totally replaced using a partnership with the private sector to fund the estimated $1.5 billion project and maintain the bridge while the PA pays back the successful bidder over 30-40 years.

Work to dredge the Arthur Kill has yet to be completed, and the new Goethals Bridge will be built to the same height as it is today — 135 feet above the water — because it does not span a “major shipping channel,” therefore will not have to accommodate larger container ships, said a PA spokesman.

The U. S. Army Corps of Engineers has partnered with the PA and various contractors to get to this point in the project.

Posted by maritimenews on July 14, 2012. Filed under All news, Dredging News, Latest news. You can follow any responses to this entry through the RSS 2.0. Both comments and pings are currently closed.
The Maritime News © 2011
About Us | Report Your News | Advertising | Contact | Privacy | Terms