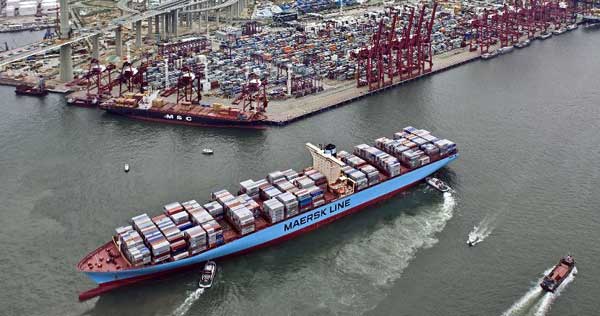 Professor Jean-Louis Tison, who heads the science team in Antartica, is amazed with Maersk Line’s handling of the sensitive shipment.

Lissa D’Arcy works for Maersk Line New Zealand as Reefer Technical Sales Executive. When presented with the unusual task of shipping ice cores all the way from Antarctica to Europe, she knew this was a challenge that would need ‘constant care’ at all levels.

Samples of ice, or ice cores, each slightly longer and wider than a baseball bat, are regularly drilled from the sea ice of Antarctica. The cores are like gold in scientific value: each containing a multitude of microorganisms (algae, bacteria and viruses) which, studies into global warming have found might serve as an efficient regulator of excess carbon dioxide in the atmosphere.

The shipment handled by Maersk Line will be used for climatic research by the Université Libre de Bruxelles in Belgium. But before the scientists can begin their work

, the precious cargo first had to traverse the globe from South to North in what turned out to be quite an exciting mission for a ‘tag team’ of Maersk colleagues.

“Thanks to Maersk Line’s advanced reefer innovation, we are used to carrying highly sensitive cargoes all over the world,” says Lissa.

The first leg of a long voyage began in February at the Scott Base in Antarctica. The ice was packed into a standard 20’ reefer container and loaded onboard a chartered supply vessel, taking it to the port of Lyttelton, New Zealand. Here, Lissa was standing ready at the quay to ensure the container was only kept ‘off power’ for a mere six minutes during both the discharge and re-load operation.

To maintain a constant temperature of -30 degrees Celsius throughout the ensuing 42-day transit time from New Zealand to Europe, the cargo was repacked into a 40’ Magnum reefer container. And then it was off to the next stopover of Tanjung Pelepas, Malaysia.

Handing over the responsibility to Jonny Cook, General Manager Reefer Operations in Malaysia, Lissa teasingly challenged her colleague to ‘try and beat my six minutes’. In actual fact, the frozen shipment could have safely been kept off-power for up to 30 minutes without any impact to the cargo cold chain.

Not only did Jonny and his operations team beat that time, they made the port record for any single load move in Tanjung Pelepas, clocking in at an amazing 4.50 minutes for the entire container load process, from quay side to vessel, to on-deck power connection.

After covering another 5,000 nautical miles onboard the ‘Maersk Seoul’, the ice cores finally reached the port of Antwerp on 24 April. Hans Durinck from Maersk Line Belgium took it from here, ensuring that the container was swiftly discharged and placed back on power in an equally impressive 8.30 minutes.

The ‘Magnum marathon’ had come to an end for Lissa, Jonny and Hans. Throughout the entire shipment, Lissa had kept a close watch on the temperature to confirm the reefer unit was operating in sound condition and maintaining the strict temperature range. All that was left was to deliver the frozen goods to a group of very excited scientists.

Professor Jean-Louis Tison of the Université Libre de Bruxelles is head of the science team who spent weeks drilling the ice cores near the Scott Base. Now present at the university’s cold store facility for the final unpacking, he admits: “Our hearts were racing when we opened the first pallet to see if the ice had travelled safely and kept intact the wealth of biological and scientific information we need for our studies.”

“We found the cores in absolute pristine condition, with not a droplet of potential melting or any broken parts.”

“It was amazing to experience Maersk Line’s exceptional level of care towards the correct handling and conditioning of our ice cores. Every detail was meticulously planned and executed and we were kept informed during every step of the transportation. Thank you to everyone at Maersk Line for your dedication and professionalism.”

Posted by maritimenews on May 29, 2013. Filed under All news, Business, Latest news, Shipping News, World. You can follow any responses to this entry through the RSS 2.0. Both comments and pings are currently closed.
The Maritime News © 2011
About Us | Report Your News | Advertising | Contact | Privacy | Terms