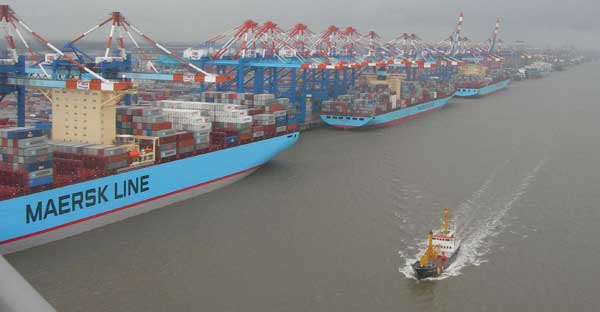 A new research project aims to reduce the energy consumption of container ships by 10-20 percent. This will result in considerable environmental and economic benefits. The Danish National Advanced Technology Foundation (Højteknologifonden) has just invested DKK 5 million in a project which is a collaboration between MAN Diesel & Turbo, Maersk Line and DTU Mekanik (The Technical University of Denmark’s Mechanical Technology Department).

Increasing oil prices have resulted in the massive container ships that carry cargo to the four corners of the world having to sail at a slower speed in order to save fuel. However, the slower speed has implications for the performance of the engine and wear and tear of components, and result in neither engines nor propellers working optimally. As a consequence, the existing fleet has to be fitted with new technology that is energy-optimised for lower speeds and, at the same time, has a lower level of emissions than is the case today.

New ships can be designed with highly energy-efficient engine systems but there is no solution for the countless ships already sailing around the world. Therefore, MAN Diesel & Turbo, Maersk Line and DTU Mekanik have pooled their efforts to develop new technology and design new propellers that are adapted for existing container ships. It is the equivalent of renovating an old house for the purpose of saving energy: fitting a new boiler, replacing windows, re-insulation etc.

The target group is the 500 ships that were built for a world with lower energy prices and fewer environmental requirements. The project has the potential to ensure economic gains running to an amount in the double-digit million range per ship.

The engine system of a container ship entails advanced interplay between the hull, propeller and the engine itself. Therefore, you can’t just replace the old engine with a new, more energy-efficient one. DTU Mekanik has, along with MAN Diesel & Turbo – who design two-stroke engines and propellers – developed a tool that is able to calculate the interaction between the three components so that it is possible to customise the optimal solution for each series of ships.

”In order to re-design propellers and engines, it is crucial that you know the precise conditions relating to the individual ship. Consequently, we have to modify the calculation tools we already have so that they are more capable of modelling the interaction between the ship and its propellers and we can go to the limits in the design of the propellers for the existing ships,” says Poul Andersen from DTU Mekanik.

If the project is a success, the ambition is to test a prototype at sea in order to obtain further knowledge. Commercial and operational considerations permitting, this may be done on one of Maersk Line’s ships.

”We are constantly challenging our ships in terms of operation and are seeking ways of making the existing fleet more efficient and environmentally friendly. This project is unique in its holistic approach to propeller design and engine performance optimised for lower speeds. With ambitions of saving 10-20% in energy, the project is, at the same time, an excellent opportunity to strengthen our cooperation on innovation with one of our core suppliers,” says Niels H. Bruus, Head of Global Optimisation and Innovation at Maersk Line.

Posted by maritimenews on June 1, 2013. Filed under All news, Business, Company News, Latest news, Shipping News, World. You can follow any responses to this entry through the RSS 2.0. Both comments and pings are currently closed.
The Maritime News © 2011
About Us | Report Your News | Advertising | Contact | Privacy | Terms