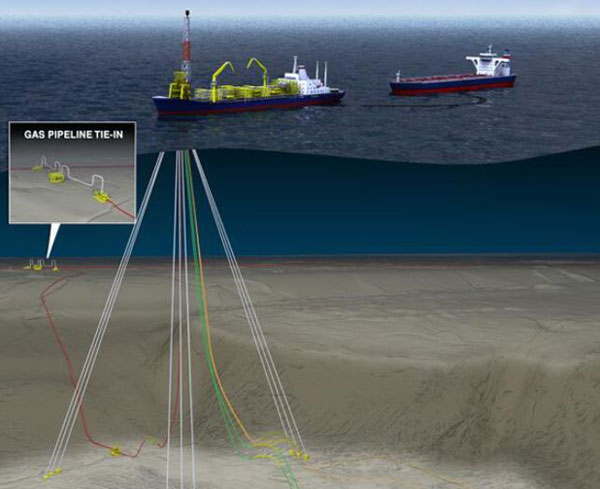 SBM Offshore announced it has signed contracts with Shell Offshore Inc. to supply and lease an Floating Production Storage and Offloading (FPSO) for the Stones development project in the Gulf of Mexico. The contracts include an initial period of 10 years with future extension options up to a total of 20 years. The Stones development is located in 2,896m (9500ft) of water approximately 320km (200 miles) offshore Louisiana in the Walker Ridge area. When installed, the Stones FPSO will be the deepest FPSO development in the world.

The converted Suezmax FPSO will have a turret with a disconnectable buoy (Buoyant Turret Mooring or BTM) allowing it to weathervane in normal conditions and disconnect from the FPSO upon the approach of a hurricane. The BTM will be configured with Steel Lazy-Wave Risers (SLWR) which will be a first application for a disconnectable FPSO. The mooring system will also incorporate the ability to adjust line tension during operations by use of an In-Line Mooring Connector (ILMC). SBM Offshore’s 30 years of turret experience including the delivery of nearly 50 systems will be leveraged to supply this pioneering BTM system.

The FPSO is a typical generation 2 design with a processing facility capacity of 60,000 barrels of oil per day (bopd) and 15 mmscfd of gas treatment and export. No water injection facilities are specified. The Suezmax hull will be able to store 800,000 barrels of crude oil and total topsides weight will reach 7 thousand tons.

In March 2012, Shell and SBM Offshore signed an Enterprise Framework Agreement (EFA) for the supply of medium and small FPSOs on a lease and operate basis. The Stones FPSO is the first Shell project to award contracts utilizing the EFA. SBM Offshore and Shell have been engaged in front-end development work for the Stones FPSO solution for the past two years. Execution work has already commenced in SBM Offshore’s Houston Execution Center with early procurement and commitments underway.

The total asset value of the FPSO is approximately US$ 1 billion.

SBM Offshore CEO Bruno Chabas commented: “We are delighted to have been selected to supply the deepest floating installation in the world, setting a new technological benchmark and confirming our position as a leader in the FPSO market and large turret mooring systems for Deepwater. The Stones project is the latest successful FPSO award with Shell and reaffirms SBM’s continued focus on building long term relationships and FPSO-led strategic vision. We look forward to working on further groundbreaking projects with Shell in the years to come.”

SBM Offshore provides floating production solutions to the offshore energy industry, over the full product life-cycle. The Company is market leading in leased floating production systems with multiple units currently in operation, and has unrivalled operational experience in this field. The Company’s main activities are the design, supply, installation and operation of Floating Production, Storage and Offloading (FPSO) vessels. These are either owned and operated by SBM Offshore and leased to its clients or supplied on a turnkey sale basis.

The companies in which SBM Offshore N.V. directly and indirectly owns investments are separate entities. In this communication “SBM Offshore” is sometimes used for convenience where references are made to SBM Offshore N.V. and its subsidiaries in general, or where no useful purpose is served by identifying the particular company or companies.

Posted by maritimenews on July 22, 2013. Filed under All news, Business, Company News, Latest news, World. You can follow any responses to this entry through the RSS 2.0. Both comments and pings are currently closed.
The Maritime News © 2011
About Us | Report Your News | Advertising | Contact | Privacy | Terms