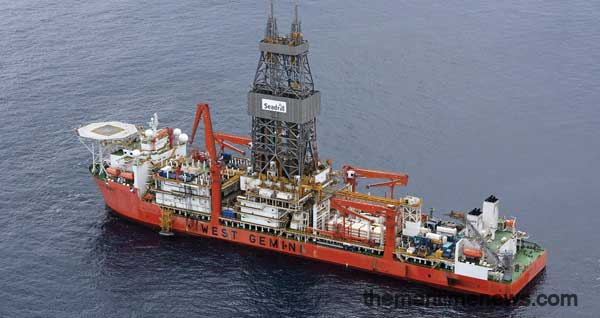 Seadrill Limited has entered into turnkey contracts to build four new ultra-deepwater drillships. Two drillships will be built at the DSME yard and the other two at the Samsung yard, in South Korea. The project value price is estimated to be below US$600 million per unit (including project management, drilling and handling tools, spares, capitalized interest and operations preparations).

The drillships will have a hook load capability of 1,250 tons and a water depth capacity of up to 12,000 feet targeting operations in areas such as the Gulf of Mexico, Brazil and West and East Africa. Also, these units will be outfitted with seven ram configuration of the blowout preventer (BOP) stack and with storing and handling capacity for a second BOP. The units include design and equipment features, which makes them particularly attractive for development drilling. For two of the drillships, Seadrill has received options to include equipment which makes the units prepared for 20K BOP systems.

The offshore drilling market has absorbed approximately 261 new units since 2005 and the utilization of the ultra deepwater fleet has been 100% since Seadrill was established in 2005. In the same period offshore production has been estimated to be marginally down. This illustrates in very simple terms the increased complexity of the development of new oil and gas reserves. Seadrill has spent significant time and effort analyzing the future demand of the ultra deepwater drilling market. Ultra deepwater production is estimated to increase from around 1 million barrels per day today to 5 million barrels per day over the next 6 years. In order to reach this target significant new development drilling capacity will have to be added. At the same time, the industry faces a situation where approximately 49% of the current floater fleet is older than 20 years. We have already seen a strong trend where fourth and fifth generation vessels are incapable of meeting oil companies’ new requirement for safety margin and deck load capacity and are being replaced with newer units.

The Board of Seadrill is of the opinion that the current order book for 2014 – 2016 of approximately 39 units will be fully absorbed, and utilization will continue at very high levels with solid dayrates for the modern equipment.

Seadrill currently has an order backlog of approximately US$19 billion. Based on current discussions, we are confident that in the coming months we will add to this as our open 2014 capacity is likely to be fixed at attractive day rate levels.

Seadrill believes that the economic and administrative benefits of organic growth are far superior to large corporate acquisitions. The decision to move ahead with these four newbuilds is taken after a careful consideration of Seadrill’s financing capacity, and is partly a reflection of the increased financial flexibility created by the sale of the tender rig fleet to Sapura Kencana. The Board has during the last year also seen significant improvement in Seadrill’s borrowing capacity. This trend is supported by strong improvement in operating results as well as increased credibility in the ECA market, the bond market as well as lower margins from commercial banks.

We expect that the four newbuilds can be fully financed through a combination of available cash and structured debt facilities, and that no additional equity or reduction in dividend capacity will be needed to support and complete the project. Longer term

The industry’s ordering of deep water drilling units for 2015 delivery has been lower than expected with only 7 un-contracted newbuilds available prior to our order. It is unlikely that our competitors can add any significant additional capacity before the second part of 2016. We are comfortable that based on our current asset composition, quality of operation and capital structure we will be able to keep our target of delivering better returns for our shareholders than any of our industry peers. The Board continues to be excited about the strong demand for drilling and the overall tightness in the supply demand situation.

John Fredriksen, Chairman of Seadrill Limited, says: “We have been able to use the current weakness in the shipbuilding industry to order drilling units at very attractive price levels. At the same time we are securing future growth by continuing to build a homogenous fleet with all the operational benefits which come from fleet standardization.

Posted by maritimenews on July 15, 2013. Filed under All news, Business, Dredging News, Latest news, World. You can follow any responses to this entry through the RSS 2.0. Both comments and pings are currently closed.
The Maritime News © 2011
About Us | Report Your News | Advertising | Contact | Privacy | Terms