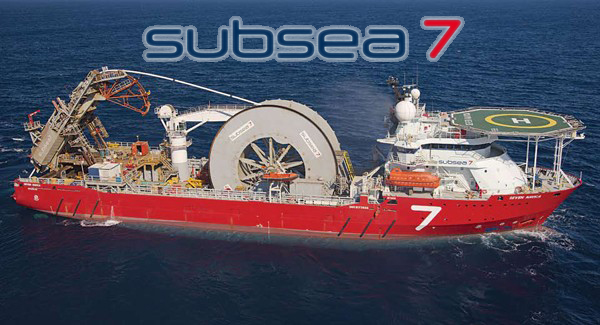 Subsea 7 S.A. announced the award of three contracts from Petrobras with a combined value (at the time of contract signature) of approximately US$1.6 billion for the construction and operation of three new-build flexible pipe-lay support vessels (PLSVs).

The work scope of each of these 5 year contracts is similar to that of the PLSVs which Subsea 7 currently operates offshore Brazil, comprising project management, engineering and installation of flowlines, umbilicals and equipment supplied by Petrobras.

The three new PLSVs are of similar design to the Seven Waves, and will be constructed in Holland at the IHC Merwede shipyard. The vessels are scheduled to be delivered in Q3 2016, Q4 2016 and Q2 2017 respectively. They are designed for operation in water depths of up to 3,000 metres, and will be equipped with a pipe-lay system for installing flexible flowlines and umbilicals, including a Lay System tower with 550 tonnes top tension capability, twin underdeck baskets capable of storing up to 4,000 tonnes of flexible flowlines and two state of the art ROVs. The total cost of the three vessels, including inventories, commissioning and mobilization to Brazil, is approximately US$950 million.

Subsea 7 CEO, Jean Cahuzac said: “We are pleased with this award which further strengthens our presence in this key deep-water territory. Based on our experience with the construction of the Seven Waves, which is progressing well, we are confident that these three vessels will be delivered on time and in line with our cost estimates. We are comfortable with the commercial model, the risk profile, and the expected financial return of these contracts.”

Posted by maritimenews on July 8, 2013. Filed under All news, Business, Company News, Latest news, World. You can follow any responses to this entry through the RSS 2.0. Both comments and pings are currently closed.
The Maritime News © 2011
About Us | Report Your News | Advertising | Contact | Privacy | Terms